new Delhi: On July 22, World Brain Day was World Brain Day. So today we will tell you about a news that is relaxing your mind and brain. The brain is the most important part of one’s body. Because all physical activities are controlled by this and the mind resides inside this brain. The mind cannot be seen. But its effects can be felt. Your happiness, your unhappiness, your stress and your fear transforms your mind into feelings and it is through these feelings that your whole personality is built.

But currently scientists do not have any way to control the mind and mind which controls the body. But now slowly the scientists of the world are moving in this direction and such technologies are being created which can control your brain like a device.

The famous American industrialist Elon Musk has claimed that his company is very close to making a chip that can be implanted in the brain of humans and it can not only reactivate the damaged parts of the brain. , But in the coming time, you will be able to listen to music by applying this chip in your mind. That is, you will not have to take help of any external device to listen to music and your favorite music will start playing in your ears whenever you want.

The name of this company of Elon Musk is Neura-Link and the chip with which this miracle will be done is named N1 sensor. Elon Musk claims that a human trial of this chip can be started by the end of this year.

How will this chip work?
So now you understand how this chip will work? There are many such receptors in our body that collect information from nearby and carry them to our brain and the brain processes these information and makes decisions.

For example, modern hearing devices are installed in the ears of people who are not able to hear. These devices carry the voice to the inner part of the ear called the Cochlea. The cochlea is connected to the auditory cortex of the brain via a vein. Sounds passing through the hearing device. It reaches this part of the brain and then by processing it, the brain understands the meaning of sounds.

Similarly, people whose parts of the body stop working due to brain problems or who have paralysis problems, many doctors also treat them by applying special devices in the brain. For this, the upper part of the brain is drilled and then thick threads of electrodes are transported to the brain. On coming in contact with these electrodes, the parts of the brain that have stopped working are reactivated. Then the neurons present in the brain react and send the message to the external computer. After this, the computer analyzes these messages and the patient is able to give commands to the computer with eye gestures. Through this, commands can also be given to those robots who are able to give food or drink to the patient suffering from diseases like paralysis and do their minor tasks. But such devices are very heavy and rely on external devices to gain power.

But the electrodes in Elon Musk’s company, Neura Link, are making a chip that is thinner than human hair and to put them in the brain, a robot has also been built that can make these electrodes in the brain without hurting the brain too much. Can deliver. It is claimed that this chip named N1 sensor will have 96 threads and more than 3 thousand electrodes will be present in them. The best thing is that no external device will be needed to charge this chip. That is, it will be completely wireless. And this chip will be able to read high volume data and signals from the brain. It is being said that along with this chip, a coil will be placed behind the ear which will be able to charge the chip and transfer the data to a computer which can be worn on the hand. That is, by applying such a chip, a human being will turn into a Cyborg, which means a person whose computer takes the place of many organs. 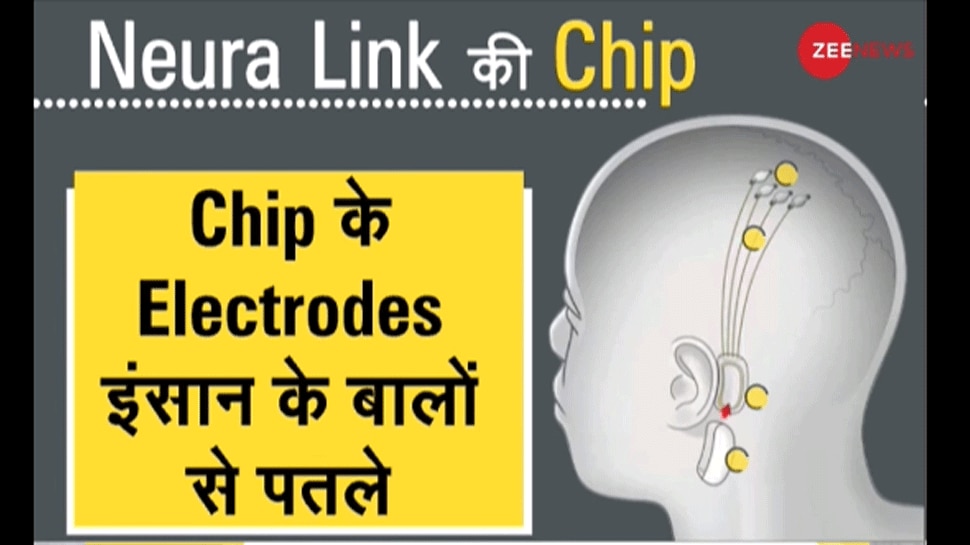 The purpose of world brain day
This news came on a day when World Brain Day is being discussed all over the world. The World Federation of Neurology started celebrating this day in the year 2014. The purpose of this year’s World Brain Day is to eradicate Parkinson’s disease. Nervous cells start getting destroyed in the brain of the victim of this disease and the affected person gradually loses control of his body. But Elon Musk hopes that his Neura Link chip will also be able to solve this problem.

Brain facts
Today we want to tell you some facts related to the brain, knowing that you will understand why the human mind still remains a big puzzle for scientists. The cells of the brain are called neurons and their number is more than 8 thousand 600 crore.

The size of a person’s brain is the largest in proportion to the body compared to all animals that have a backbone.

On an average, a person’s brain weighs around one and a half kilos. Within a year of being born, the size of the brain of a person increases three times and it keeps growing till the age of 18 years.

It is often believed that humans do not use even 10 percent of their brain capacity. But scientists do not agree with this fact. According to scientists, man uses his brain’s capacity much more than this and 10 percent of his brain is used only at bedtime.

And the funniest fact is that if a person’s brain is cut off directly, the brain will not feel pain, because the brain does not have receptors to feel pain. But whenever there is pain in our body, the body transmits this signal to the brain and we start feeling pain.

But do not wait for a computer to keep your brain healthy. You can become the master of your mind whenever you want. Just for this you should come to see things properly.